Sea in the Southern Hemisphere

In a tropical sea on Intaki prime an Elasmobranchii class carnivorous fish began its slow and meaningful ascent to the surface of the rich blue sea. Smaller fish that saw it darted away but due to its presence the area around it held few other sea creatures many knowing the dangers that it represented.

4.6 AU away and 6,000km from the Intaki II Federation Logistics station a Rokh class Caldari battleship sat cloaked in space awaiting its prey capsuleer Richard Masseri could feel the anticipation as it played across him, the ship and the crew. The feeling of suffocation was heavy in the air or for Richard heavy in the gelatinous substance that permeated every orifice of his body. Breathing in the common way was not something done inside a pod and considering how long Richard was prone to stay in pod it was a wonder his body knew how to breath at all. The many tubes and wires fed him food, information and air alike, like the carnivorous fish so very far away Richard was used to being submerged he was also used to hunting.

The fish watched its prey as the creatures far above if flittered about around a rotten carcass that had returned to the surface. They were ignorant of its presence oblivious to the danger that  lurked below the surface of the water, they fought each other over the scraps little know another was slowly approaching in readiness to feed upon them.

Richard Masseri watched his crew as they quietly prepared for the upcoming event it was unusual for a ship this large to be so quiet but the silence reassured him that all parties knew the significance of what was coming. A minor act some might call it petty but also a meaningful one an act of wanton violence on an unarmed target. This was not his usual style however that was about to change.

The fish began its steady ascension as it did so it sized up the prey it needed not only surprise but perfect timing there were three birds and with perfect timing all three could be claimed.

"Local Spike. Four federation targets have entered system." The message hit Richards eardrums at the same time it was fed into the active local channel on his neocom. The targets had arrived four pilots two with similar callsigns, a message from Dutch confirmed that they were, as expected, that they were all piloting shuttles. Richard activated directional scan and waited, nothing then yes four shuttle 14AU, 10AU, 5AU, 1AU. Decloak.

The fish sped to the surface breaking through the water it lunged mouth opening wide teeth sharp as knives the birds hardly knew what was happening as the jaw slammed shut two down the third opened its wings in an attempt to escape.

The shuttles popped out of warp and between them and the station stood ILF Kalipela the Rokh class battleship piloted by ILF pilot Richard Masseri. They registered this information just as the smartbombs began to activate eviscerating the shuttles in which the pods of these federation operatives were situated. The pods then sat there unprotected a vulnerable layer between space and there own capsuleer occupants.

The fish lunged again its jaws catching the bird just as it launched into the air the timing was perfect 4.6AU away the smartbombs began there second activation each pilot suddenly was exposed to the pure vacuum of space and the damaging power of a smartbomb blast.

After a small delay salvage drones quickly cleared the wrecks and each frozen corpse was cleared away then Richard cloaked the ship 4.6AU away the carnivorous fish returned to the depths its hunger sated for a time.

The viscous liquid travelled up his throat and bubbled and drooled out of his mouth some being propelled with force while the bulk ran down his chin or fell to his chest, stomach, legs or feet . as it did so it joined the same liquid that already blanketing his skin. Taking another few uneven steps forward Richard felt the strength start to make its  way painfully into his muscles. He had been in the capsule for easily 48hours and the time now weighed on his body every inch hurt, the water was like a good right hook to the temple and some of the drowsiness left him as his senses started to return.

Ten minutes later he was fully clothed are walking out to meet his fellows.

“Namas.” Richard responded appraising the man with a glance

The man was thin heavily tattooed  with a drawn face and no noticeable hair, he was wearing a sharp black suit with ruby red lapels.

“I trust everything is to your liking Sri.”

The room was fairly spacious and in addition to Richard and the unnamed man there were nine others in military garb all whose faces were covered wearing the standard protective face gear of marines or bodyguards.

Richard smiled “That really does depend doesn’t it, but you have definitely done your best and that I am grateful for that.”

The man smiled bowed low and left the room one of the other men followed him out.

Another of the men then came over and passed a neocom to the capsuleer and Richard took it tapped in his passcode, immediately his interest was elsewhere looking at production facilities and market data with a flick of his fingers one of the walls showed a much enlarged image of his industrial facilities on Intaki I through to VII and with rapid vigour he set to work.

Many hours later Richard entered another room at its centre was a bed the cream sheets felt soft to the touch and Richard laid his body down onto them, the lights in the roam continued to pour there glare upon the room but eventually Richards eyes closed and he began to slumber.

Outside of the mobile structure a cruiser sat cloaked awaiting the return of its pilot work teams and drones milled around and took guard duty shifts some even visited the structure taking there own time to rest up the atmosphere was hushed and complacent if something was changing none there openly admitted it.

Richard manipulated the chopsticks and raised another dumpling to his lips the fatty salty broth made him salivate as he opened his mouth and bit down on half the dumpling severing it in two. Holding the other half in place he started to chew taking pleasure in the delightful aroma and the textured crunch of the shrimp and vegetable filling. Each chew excited his mouth with more flavour like a mini smart bomb dishing out its charge be it the the crunch and sharp hit of onion or the sweet taste of shrimp. When he finished the final dumpling he raised the bowl of broth to his lips and slowly sip by sip inhaled the last of this pleasurable meal.

Dutch looked across the table at him his own bowl finished and abandoned a glass of half drunk firewater in his hand.

"I'm sorry Richard I just don't understand you at the moment, you returned here. After all that crap in Ichoriya and so much time in hibernation in your damn pod and your here. Its almost like you have lost the last five years."

"Dutch did I ever tell you why I left the ILF?"

"Well I assumed it was because you had given up and needed a change."

"There was a bit of that I guess, along with a wish to increase the number of people I was allowed to shoot as well but no those were not the main reasons. I left to experience new things meet new people and also maybe the most compelling thing of all, learn."

"How noble of you, as far as I recall we just trained our guns on more targets and less rocks."

Richard grinned at his colleague he had worked with Dutch for years and the man knew him very well indeed.

"Now I know your being flippant my time in the Pyre Falcon Defence and Security Corporation was very enlightening the skill and dedication of my fellow capsuleers was amazing. There are many in that group that I admire and it was a joy and an honour to serve with them. That organisation taught me a lot."

"How was your time at Sigil Solutions then?"

The question clearly surprised Richard and he took a moment to consider his response.

"Sigil was and is an idea but that corporation has yet to find its feet and I tried there and then yes that is where the gap opens and my hibernation begins."

"I must take my leave now."

Richard inspected the cargo that he had salvaged from his destroyed ship his body was a mess of bone, flesh and metal but it was still without a doubt him. Punching some instructions into data pad drones quickly appeared and removed the body and the rest of the cargo away.

Richard then stripped, his body felt fresh and new the implants and augments were only recently installed and some aches and pains remained from the surgeries. He hooked himself into the pod and then started to think, the pod juices swirled around him covering him, drowning him. A slight tang of fear touched his lips as he opened his mouth for a brief moment and it filled with liquid.

Another day in the life of a capsuleer 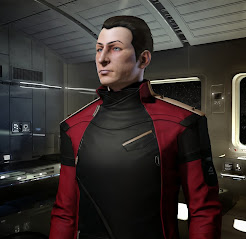